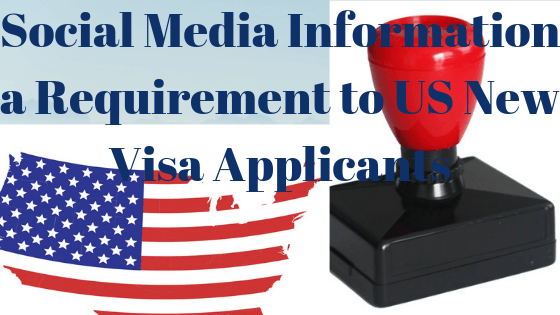 Now, for new visa applicants will be required to provide their social media information dating 5 years back according to new rules.

The State Department requires visa applicants to provide their social media profiles where their friends, family, phones, email addresses are some of the key information needed for screening. The Trump administration cites the rules is a security measure to American citizens.

The new rules were proposed last year and the authorities according to BBC estimated to affect close to 15 million applicants annually.

However, there is a diplomatic and official applicants category that will not be affected by the new rules. The only group not exempted is for those traveling to study or work in the US that will have to comply with the new changes.

According to the Newyork Times, the state department said,
“We are constantly working to find mechanisms to improve our screening processes to protect U.S. citizens while supporting legitimate travel to the United States.”

Two years back, President Trump had requested the secretary of state to have a uniform baseline for vetting and screening processes.

The state department had started the process during the Obama administration, though back then applicants were required to voluntarily share their social media information.

In September 2017, the Homeland Security Department enacted & proposed immigrants and naturalized citizens to have their social media profiles put under surveillance. So, the newly adopted rules are a step-up measure of past progressive ideas & plans.

Before the introduction of new rules idea, the only applicants who were required to share their social media information are those from areas controlled by terrorists.

An official who spoke to the Hill gave a warning saying that,
Anyone who lies about their social media use could face “serious immigration consequences”

The announcement of the visa applicant demands has been met with criticism from the American Civil Liberties Union. The rights group argue that the new visa application rules do not show evidence of how the mechanism to monitor Social Media information will be effective. Instead, it will lead to applicants self-censoring their information on Social Media.

During the 2016 US presidential campaigns, Trump vowed to put security measures on all immigrants and his administration seems to be focused on implementing that.

Even after various quarters questioning the Trump government about the new visa applicant changes, the relevant body did not clearly state what they intend to do with the applicant’s information.